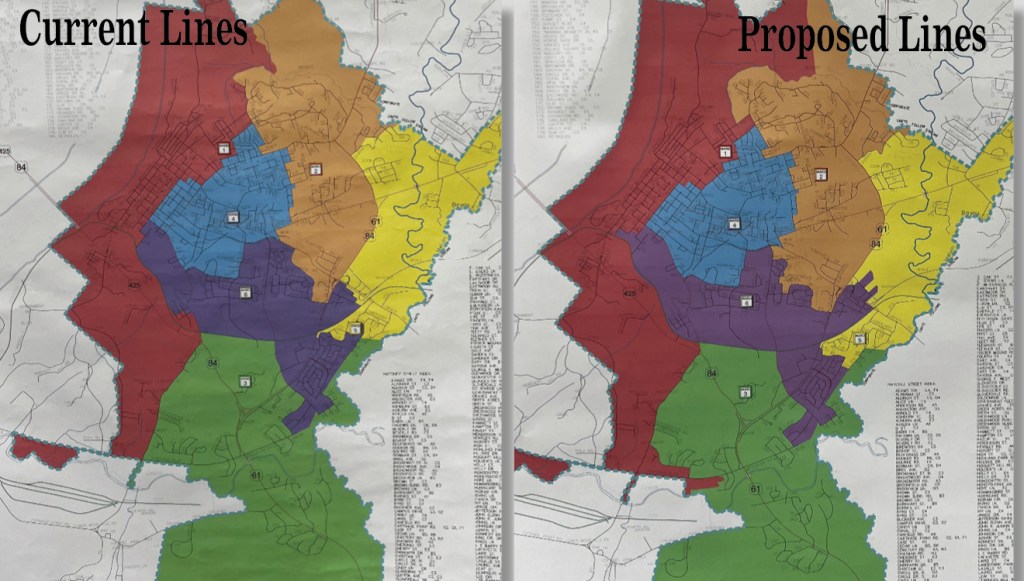 NATCHEZ — Tommie Cardin, an attorney for Butler Snow and a member of his Regulatory and Government Group, led the government through a proposed plan to reshuffle the mayor and board of aldermen during a public hearing on Tuesday.

“The purpose of the public hearing is to get public input on the county lines. It is not intended as a question-and-answer session with the Board of Directors. The board is taking no action tonight,” Cardin said as he opened the hearing.

He presented an overview of the proposed plan.

“The city has a population of 14,520,” Cardin said, according to the 2020 census. “Six perfectly sized boroughs would have 2,420 residents each. The U.S. Supreme Court has ruled that you don’t have to match that number perfectly, just plus or minus 5 percent in each district, which would bring your deviation to less than 10 percent.”

With current county counts, the city is at a 14.63 percent discrepancy, requiring a reallocation because the discrepancy with current census figures is more than 10 percent, Cardin said.

The current population of each parish is:

Cardin said Districts 2 and 5 need to gain population, Districts 3 and 6 are currently overpopulated, District 1 needs to gain “a little” population and District 4 is “almost ideal.”

“It’s difficult to go through this process and not affect all station lines,” Cardin said.

He said he and his team visited each individual board member and got their input on the geography and characteristics of the community.

In making changes, he said each parish is cohesive and as compact as possible, following natural geographic boundaries where possible, and keeping “census blocks” used by the Census Bureau in its census intact, meaning a census is not split going to block between different stations. Two census blocks have been split under the current district administration and the proposed plan fixes that, he said.

The total variance, or deviation, under the proposed plan would be 6.81 percent, “which is well below the maximum deviation,” Cardin said.

In the proposed plan, the population would be:

Only three people spoke at the hearing. Joyce Arceneaux Mathis and Philip West congratulated Cardin on his work on the redistribution plan. Rev. Marcus Archer, whose Crosspoint Church serves as a constituency, asked if he would change the constituency, to which the answer was yes.

The Board of Aldermen is expected to discuss the plan at its next meeting on Tuesday, December 13 at 11 a.m. at the Council Chambers, 115 S. Pearl St.