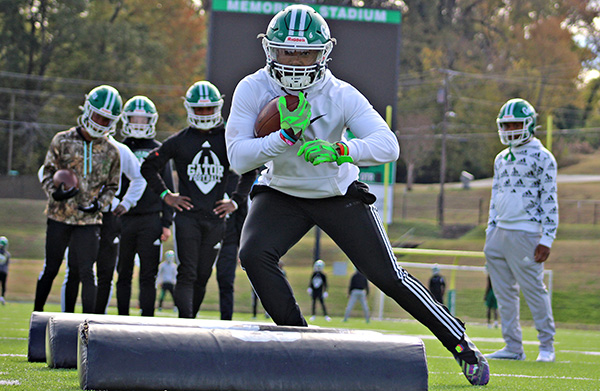 When they traveled to West Point for a playoff game last season, coach Todd McDaniel admitted his Vicksburg Gators were blown away by the big stage — and maybe for good reason.

It was the first time the team had advanced this far into the playoffs in more than a decade. They played one of Mississippi’s most dominant programs, appearing in the MHSAA Class 5A title game for the sixth straight season a few weeks later.

The result, a 42-6 win by West Point that wasn’t even that close, was predictable. It wasn’t a pleasant experience, McDaniel said, but it was a necessary one that the Gators had to endure in order to take them to the next level.

“It gave them the opportunity to play a high-quality program. A program used to winning state championships. And to be able to see the effort these kids put into every single game. They had never seen anything like it before,” McDaniel said. “When you have the opportunity to see it, feel it and touch it and then go back and think about it, you say, if we hadn’t been so impressed, it could have been a better football game. It was part of the process. It was something that had to happen. Without that, we probably wouldn’t be here now.”

Where they are right now, they’re staring at a rematch with West Point with a huge prize on the line. Vicksburg (10-2) will host the Green Wave (10-2) in the Class 5A Semifinals at 7 p.m. Friday at Memorial Stadium.

It’s Vicksburg’s first trip to the semifinals since 2001. And for that new experience, they said, they’re more than ready.

“(Last season) helped us a lot. Last year we went there for the first time and we really didn’t know what to make of the atmosphere. Now they have to come to The Swamp,” said defense attorney Demarcus Johnson.

With 11 state championships in 40 years, West Point is one of Mississippi’s most successful high school football programs. Vicksburg is looking to advance to the premier league with a landmark win on Friday night.

Vicksburg won 11 games in the three seasons before McDaniel arrived in 2020 and went 4-8 in his freshman season. They improved to 7-5 in 2021 — including the lopsided playoff loss to West Point — and reached for the 10 wins for the first time since 2001.

“I had no doubt that this was going to happen. We talked about it a lot and a lot of people probably thought I was crazy,” McDaniel said. “These staff and these kids really bonded. We knew that as we put the work into it and kept praying about it and the kids got involved and we’re here now. We are happy to be here, but we want to go further.”

They need one more win – a very difficult win – to do that and advance to the Class 5A championship game on December 2nd in Hattiesburg.

West Point has notched up 10 straight wins since losing its first two games of the season to fellow state powerhouses Louisville and Starkville. It has conceded 34 points overall in its last six games of the regular season and is the dominant program it has always been.

“They’re going to be the top dog until someone can take them out. We’ll do our best to do that on Friday,” McDaniel said. “I believe if we play our A-game, we can play with anyone in the state of Mississippi.”

The Gators earned home field advantage for this game by winning the Region 2-5A championship — the program’s first regional title since 1990 — and the MHSAA’s method of closing semifinal spots between Regions 1-5A and 2-5A switch.

It’s the latest planning quirk that the Gators have benefited from this season. Two of their toughest games in the region, as well as all three playoff games, came at Memorial Stadium. They’re 7-0 at home this season, and McDaniel asked for plenty of community support to make playing on their home field a real advantage for the Gators in their biggest game yet.

“It helps to be able to be in your own home and surrounded by your fans. If you’re a gator or a viking, come out and support us. We’re all together now,” McDaniel said. “We want it to be loud. We don’t want them to be able to hear when they have the ball. We want this stadium and these hills full. It’s the only game in town. Come watch some football the day after Thanksgiving.”

WEST POINT NEAR VICKSBURG
• MHSAA Class 5A Semifinals
• Friday, 7 p.m
• Radio: 107.7 FM
• Tickets are $12 for reserved seating and $10 for general admission and are available on GoFan.co

Ernest Bowker is Sports Editor for the Vicksburg Post. He has been a member of the Vicksburg Post sports team since 1998, making him one of the longest-serving reporters in the newspaper’s 139-year history. A native of New Jersey, he graduated from LSU. During his career, he has won more than 50 awards from the Mississippi Press Association and Associated Press for his coverage of local sports in Vicksburg.